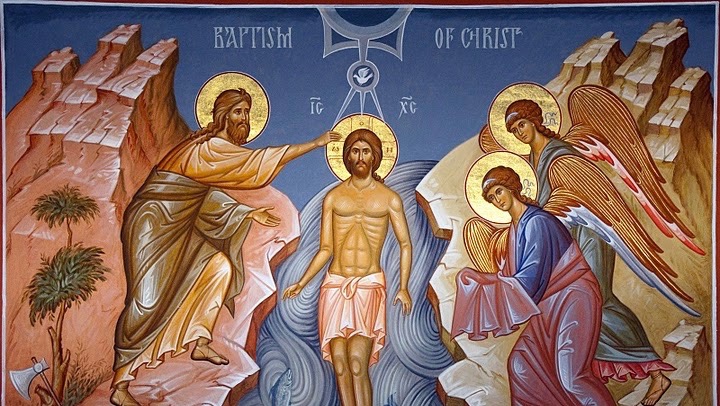 The Holy Trinity is a mystery that has been long debated in the history of the Church and is the cause of much confusion to both Christians and non-Christians alike. Most theists are either monotheistic, or polytheistic – that is to say they believe in one God or multiple gods. Nevertheless, for Christians such as us, we make a unique claim – we boldly confess One God in three persons – Father, Son, and Holy Spirit.

Now this Christian dogma that we have is indeed monotheistic – our Orthodox Creed clearly begins by stating, “We believe in one God […],” but that same creed goes on to explain that our God is three in one: “We believe in One God, God the Father […]. We believe in One Lord Jesus Christ […]. Yes we believe in the Holy Spirit!”

But what does it mean to say we believe in One God, only then to turn around and confess Father, Son and Holy Spirit? To understand this, we need to define a few key terms.

Two crucial words that must be understood in order to properly approach the Doctrine of the Holy Trinity are Essence and Person. First, “Essence” is often times synonymous with the words “substance” or “nature” – it’s basically WHAT something is. Similarly, when someone asks about the “nature” of such and such a thing – they are basically asking WHAT IS THIS ALL ABOUT. In this manner, the Church has taught us since the very first apostolic centuries that God’s essence is one and the same. The Divine Essence of God is shared perfectly and completely in the Father, the Son and the Holy Spirit. In Greek the term used is OUSIA – it is from this same word that our Holy Father St Athanasius the Apostolic and the rest of the Holy Fathers present at the council of Nicaea used the word HOMOOUSIOS in the creed to explain how Christ was co-essential with the Father – of the same essence!

Second, “Person” is used to say WHO someone is. The term used here in Greek is Hypostasis. This key word of “Person” is what explains the uniqueness of and distinguishes characteristics between the Father, the Son, and the Holy Spirit. And this is where the mystery of the Holy Trinity lies – in the fact that Our God is one in essence, and yet three Persons. Although the three Persons of the Trinity are in the same Divine Essence and are united in that one Essence, they are also unique in their personhood. The Father is the un–begotten, the Son is the begotten, and the Spirit is He who proceeds. All three united and are One, and all three Diverse without every being divided!

St Athanasius in many of his writings in teaching on the Trinity, specifically in combating the Arian heresy speaks to this very point. He says the following:

“The Trinity, praised, reverenced and adored, is one and indivisible and without degrees. It is united without confusion, just as the One God is also distinguished without separation. For the fact of those venerable living creatures (Isa. 6; Rev. 4:8) offering their praises three times, saying ‘Holy, Holy, Holy,’ proves that the Three Persons are perfect, just as in saying ‘Lord,’ they declare the One Essence.”

It is for this purpose that the Church in her liturgical prayers has always taught that even if our focus should be directed to one Person of the Holy Trinity, we are always reminded that our God is Three in one and One in Three. When we offer worship to the Father, we are reminded of Son and the Spirit and offer worship to all three. When we remember the Holy Spirit, our minds are brought back to the Father and the Son. And the same also applies when praying to our Lord Jesus Christ. For instance, the Prayer before the reading of the Holy Gospel. Listen carefully to the words of the priest:

“[Before the reading of the Gospel]

Our Lord, God, Savior, and King of us all, Jesus Christ, the Son of the living God, to whom be glory for ever. Glory is due to our God unto the age of the ages. Amen.

You are He [Jesus Christ] to whom praise is due from everyone with one voice, along with glory, honor, majesty, and worship, with Your Good Father and the Holy Spirit, the Giver of Life, who is of one essence with You, now and at all times and unto the age of all ages. Amen.”

As you can clearly see, although we confess the uniqueness of the Persons of the Trinity, we also never separate them to the point where we deny their unity and sameness in essence.

To further clarify this point on the words “Essence” and “Persons,” we have to speak about human beings. We know that, in Genesis 1:26, God said that he created humanity in “His image and likeness”. And just as within God there is unity and diversity, so also He created man in that same fashion. Every human being shares the same Essence – Human nature. And yet every person, although human just like the next, is his or her own unique Person. However, we need to specify that we would be very wrong to project on God the fallen characteristics of a broken and sinful humanity.

For example, when we say that the Father, the son and the Holy Spirit are one in Essence, we are not merely saying that they all belong to one single type or category of being. No, what we are saying is that all Three are in one Divine essence, meaning that they form a single, unique, specific reality. Within that reality is oneness with no hint of division.

And this is what would distinguish the persons of the Trinity from the persons we see in humanity. Human beings, because of the fall in sinfulness, no matter how much we attempt to work together as ONE united humanity, we always fall short because our wills, our lives, our efforts are divided and self-centered. We falsely claim that we are united by trying to enforce uniformity, and we claim that our diversity is the cause of our division. But in the case of the three Persons of the Trinity, there is diversity but never separation, and They are truly united without the need for uniformity! And this says something to us about both WHAT and WHO we were created to be in God’s Image! Diverse and yet United! In future videos we will discuss the Trinity as the standard for humanity, how the Trinity is Love, the Trinity in scripture, and other approaches to apprehending the Trinity.

In conclusion, it is good to reaffirm simply that indeed we believe in One God in three Persons – always united, never separated in will, in dignity, in honour and glory! And although we may not be able to understand how this may be, it suffices us to say that the reason we cannot find anything similar to God in attempting to understand Him, is maybe because if our God was comparable to anything we could know, then this would render Him to be no God at all!